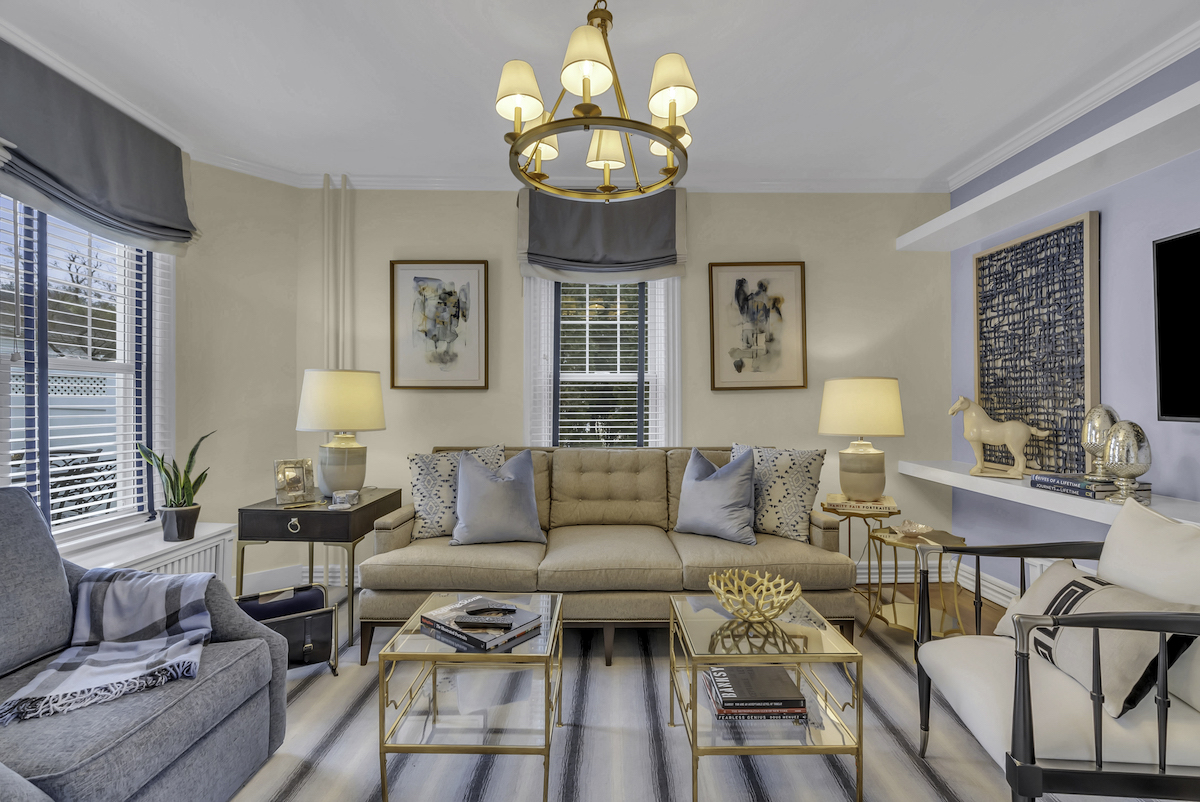 Looks can be deceiving, and that’s exactly what an Asbury Park designer counted on as he worked to conquer aesthetic flaws in a 125-year Rumson colonial with a bit of illusion.

True, this reno was largely comfort-driven—a decision born during COVID. Today the couple are soon to be empty nesters, with the youngest son off to college in 2023, but during the pandemic’s darkest days a family of four shared the home.

Though comfort was key, no designer worth his salt would be blind to aesthetic flaws, such as narrow rooms in the style of a row house. And so it was that Jon Martinez of Asbury Park’s Beautiful & Gracious Designs became a master of illusion as he seized every opportunity to exaggerate width while pursuing an elevated and refined style. The reno’s common thread is the palette of ivories, grays and blues accented with the glam of gold-toned elements and black lacquer, Martinez explains.

Martinez gave the living and dining rooms a new sophistication, but the biggest change is something the couple did not even have on their radar. The designer persuaded them to transform a three-season room that was being used simply for storage into a sunroom furnished with custom club chairs—“a spot that’s now their favorite,” especially for reading, he says.

Probably the first thing that had to go is what Martinez calls an “oddity” of a window that had been wasting space between the sunroom and the living room. Losing the window cleared the way to the sunroom’s biggest illusion: a wrought-iron-trim mirror designed to give the effect of size. Another trick was using sheer drapes to soften the look of three walls of glass sliders.

The couple wanted the living room to grow up to an adult space, so Martinez eliminated a domineering sectional and “started fresh” with a sofa from Vaughn and a mix of materials and styles. Art pulls together the palette, but the real design magic is the rug, with a cleverly positioned stripe to exaggerate width.

A departure from the transitional style evident so far, the dining room displays a mix of Chippendale and Asian. Black and gold unite in the chandelier and buffet lamps to create drama. As for the illusion, he explains: “The starburst mirror added visual depth and interest to the console wall, which is the feature wall.”

What started as an ode to comfort evolved into a sophisticated next chapter for a future empty nest, and the homeowners are embracing the change.