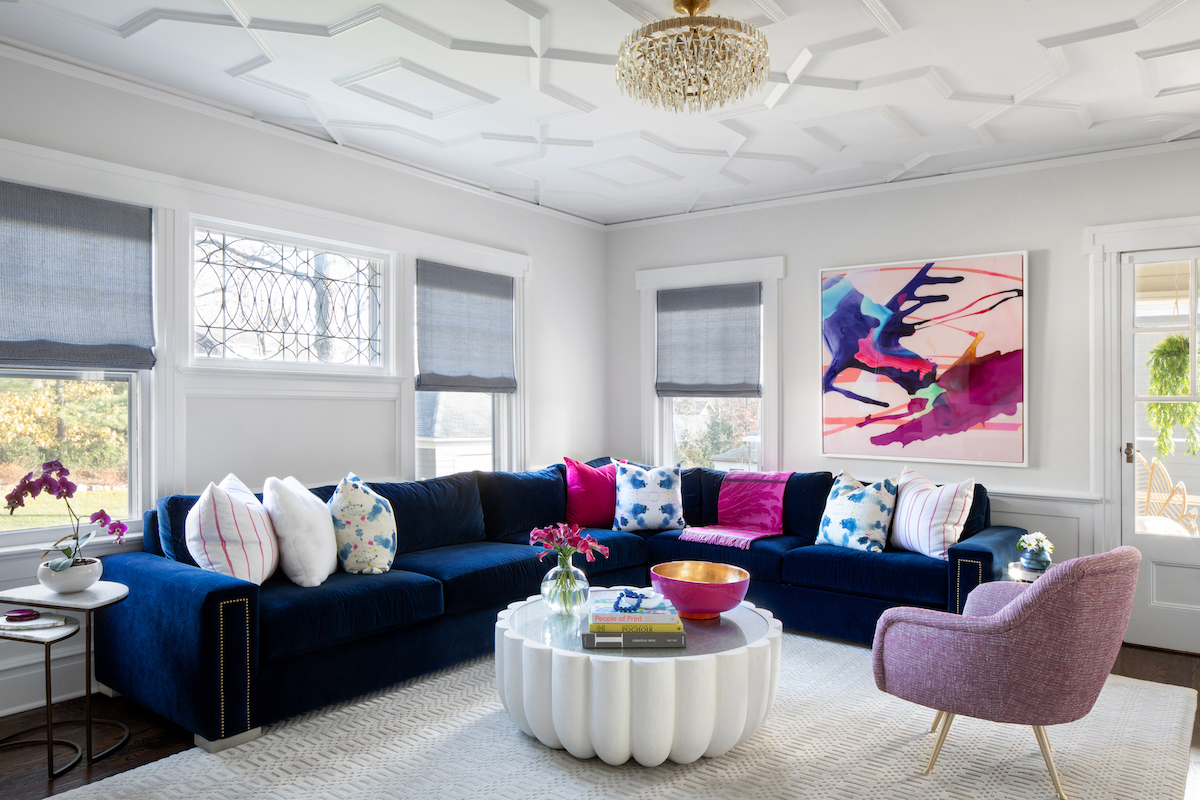 “It’s a funny story,” Karen Wolf says. When a young couple, moving from Hoboken to Maplewood, approached her about designing a historic home they’d recently bought, neither she nor they realized that Wolf had a personal connection to it. “Then they sent me photographs,” she recalls, “and I said, ‘That’s my cousin’s house!’” Seven years earlier, Wolf had helped her cousin redesign the space, giving it what she calls “a transitional glam feel.” Her new clients were looking for something very different. 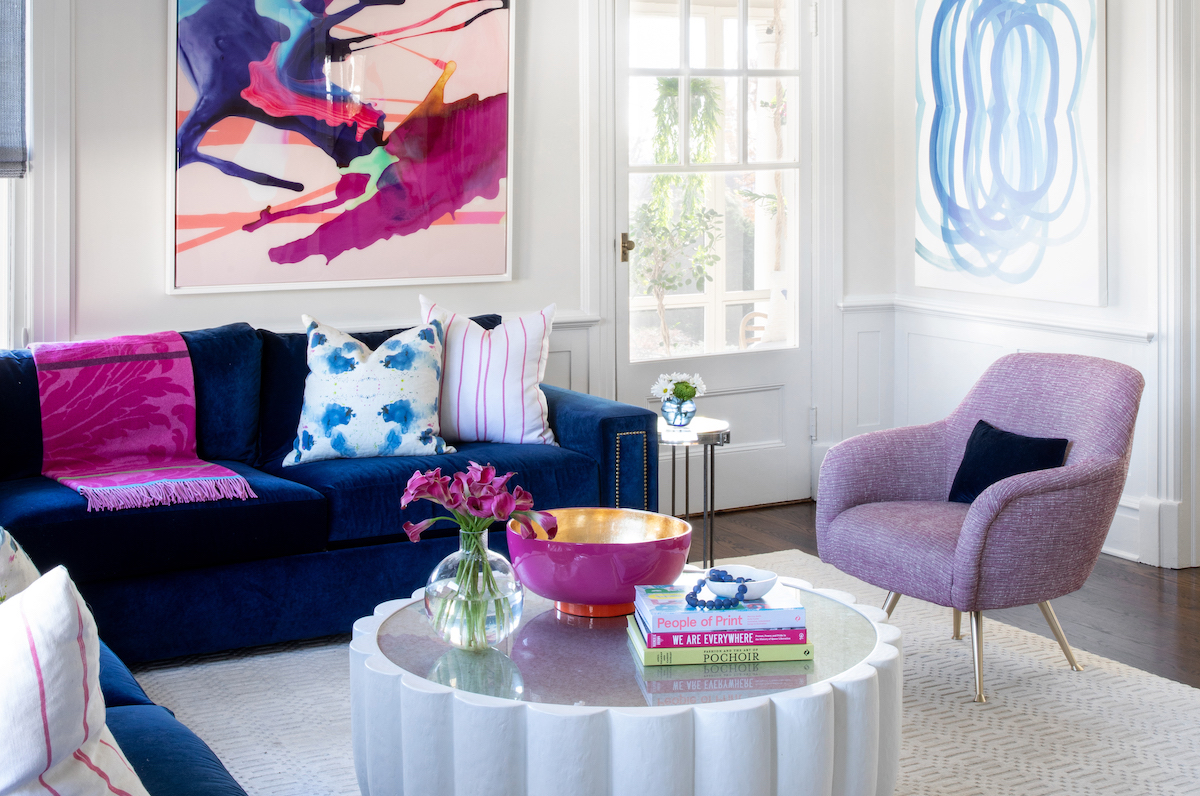 The homeowners, Jonathan and Irina Moses, who had two young children and an energetic miniature schnauzer, wanted to honor the house’s history and its period details, but they were also eager to incorporate what Jonathan describes as “energy and color.” “They wanted a more unexpected, powerful, impactful look,” Wolf says. “They wanted you to walk in and say, ‘Oh!’”

That’s precisely the effect Wolf achieved with her stunning design, starting with what, in most other houses, would be the little-used formal living room, just to the left of the entryway. “We wanted it to have a purpose and some ‘wow’ factor,” says Jonathan. “Wow” might be an understatement. The couple decided to transform the room into a lounge—a place to retire to with guests after dinner to share conversation and relax. Wolf chose a midcentury modern theme for the room, with four Barcelona-style chairs grouped around a double-round coffee table. The backdrop is a wall of bookshelves, set against an eye-catching blue-and-white geometric wallpaper, which ended up being the design’s greatest challenge. “It’s a great wallpaper and I love it, but it really did prove to be a lot busier than I thought it would be, so I had to undo my own busyness,” she says. She accomplished that to great effect with carefully curated touches like groupings of blue and white books and a series of slender vases.

The room’s showstopper is a modern chandelier consisting of slim-lined gold circles cascading from silver wires. One of Wolf ’s convictions is that lighting should act as the jewelry of a room, and in this case it’s a marvelous midcentury tiara. In spite of its modern theme, however, the room feels true to its historic origins. Deep blue-gray paint—on the walls and the ceiling—plays up the early-20th-century molding and also adds a cozy touch to a room whose very purpose is conviviality. Perhaps not surprisingly, the lounge is the homeowners’ favorite room in the house.

Another space they like—equally dramatic, if for different reasons—is the family room. Its intricate ceiling millwork makes an eye-catching impression, and when the house belonged to Wolf ’s cousin, who frequently hosted large, formal dinner parties, the designer transformed it into a dining room. But for the new owners, says Wolf, “it made more sense as a family room.” It’s also a prime example of Wolf ’s deft use of color, with a technique she likens to weaving. Much of the space is white—the walls, ceiling, the large area rug and an eye-catching fluted-edge circular coffee table. The homeowners were worried about maintaining a white sofa, so Wolf chose a deep navy sectional. “We wanted a color you could pop other colors off of, and that blue is almost like a neutral,” she says. Then she wove two other colors—blue and purple—throughout the space, but carefully, so that they make a deep impression without overwhelming the space. A purple bowl on the coffee table, for instance, and a lavender occasional chair facing it lead the eye to a purple throw and throw pillows on the sofa, which in turn connect upward to a stunning abstract painting dominated by blues, purples and shades of pink.

Those same blues and purples lead the way to the formal dining room; on either side of the entryway to the room is another abstract painting, one in shades of blue on white, the other purple. But the dining room derives its “Oh!” impact not from the color purple but from metallic touches, such as a gold-trimmed mirror, a small buffet with gold legs and a painting that consists of gold whorls against a white background. “We wove in that metallic to elevate the room and make it feel slightly more formal,” Wolf says. In contrast, the gold and glass satellite pendant is striking in its playfulness.

“We were looking for energy in this room,” says Jonathan, “and Karen really delivered it.”

In the lounge, one of four Barcelona-style chairs from Lee Industries—this one in tan leather—makes a strong midcentury modern statement. The custom-colored art print from Art Addiction adds to the drama.

In a historic house, the word “energy” is sometimes used to describe the presence of previous owners, and it’s particularly apt here. In addition to the discovery that it was once home to Wolf ’s cousin, another coincidence involving its ownership emerged. “After buying the house,” says Jonathan, “we discovered that it was owned in the 1930s by the grandfather of one of my best friends.” It’s not too much of a stretch, then, to suggest that the pairing of designer and homeowner was in the stars. And it’s no stretch at all to conclude that the real star in this historic tale is a house that perfectly reflects both its past and its present.