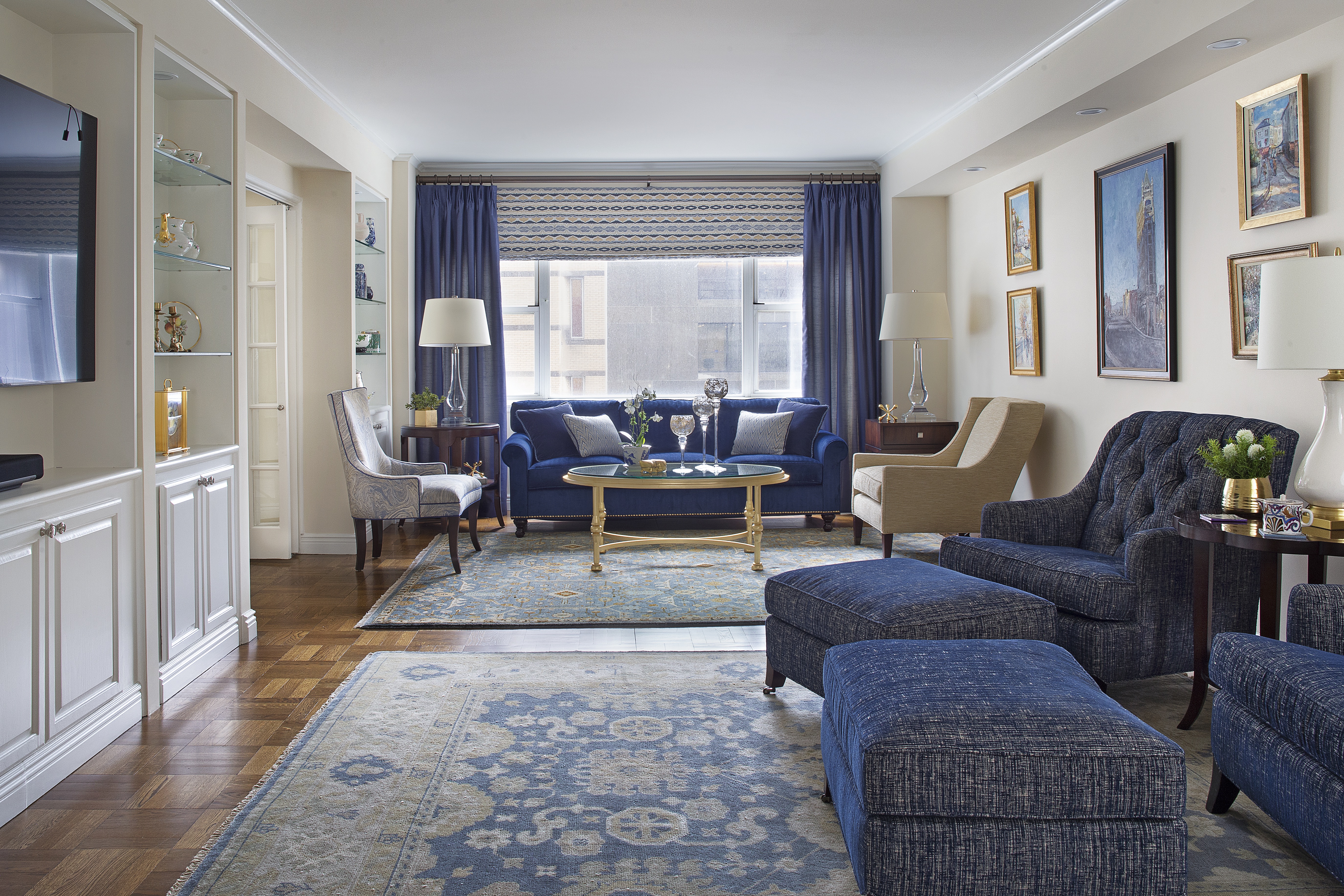 A new retiree forges a fresh start in an elegant, urban apartment.

For the homeowner, it was just the beginning. Newly single and on the cusp of retirement, she saw her future in this 1,400-square-foot, one-bedroom city apartment. “I had left my husband and our apartment and almost all the stuff,” she remembers. “I moved in with only a card table and two card chairs,” she says. That gave interior designer Diane Durocher a clean slate to work with. “She hired me to design the apartment with classic furnishings and timeless ambience,” says Durocher of Diane Durocher Interiors in Ramsey. One of the few things the homeowner did bring with 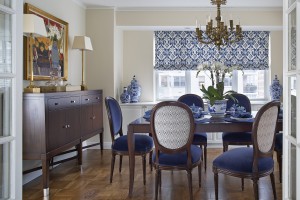 her from her former life was some Delft pottery, so Durocher used the blue as a jumping-off point for the design. 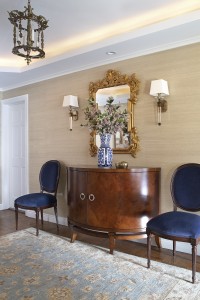 “She showed me an ikat print fabric in blue that I absolutely loved, and everything flowed from there,” says the homeowner. The fabric became a Roman shade in the dining room, which is the homeowner’s favorite room in the apartment, thanks to a beautiful table and oval-backed chairs, a custom walnut server, a new built-in radiator cabinet with an abundance of storage and bookcases that handily accommodate her books and accessories. “It functions really well and looks really elegant,” she says. “Not a lot of apartments have separate dining rooms, but this one did, and I’m getting tremendous joy out of it.” The dining room is adjacent to a bright and sunny living room, which was divided into two distinct sections. “The client wanted a TV viewing area with comfortable seating as well as a more formal area where she could entertain her book club,” explains Durocher. One of the most striking aspects of the design is the navy blue drapery, which emphasizes the height of the room, and the ikat-pattern Roman shade valance, which conceals a practical Duette honeycomb shade set on a timer to aid with glare. The drapery frames a favorite navy upholstered sofa. “I had always wanted a navy couch,” the homeowner says, “and I wanted to go a little more feminine, which I could do. The best part was not having to compromise on my choices.

I’m still loving that aspect.” Durocher designed the tranquil bedroom around the upholstered bed in shades of sea green and blue. An avid bibliophile, the homeowner requested bookcases, a comfortable chair and ottoman for reading and nightstands with storage. “The chair is unbelievably comfortable,” says the homeowner. “I just get a feeling of peace and serenity when I’m in this room.” The project took about eight months and was a success, from personal and professional standpoints. “When my book club walked in for the first time, some of them just gasped,” says the homeowner. “Everyone who sees it loves it.” And the design won a silver award for Durocher in the apartment category at the American Society of Interior Designers Design Excellence Awards. The work was done while the homeowner was winding down her career, and now she really can enjoy her surroundings. “I’m loving my apartment,” she says, “and retirement is great.”