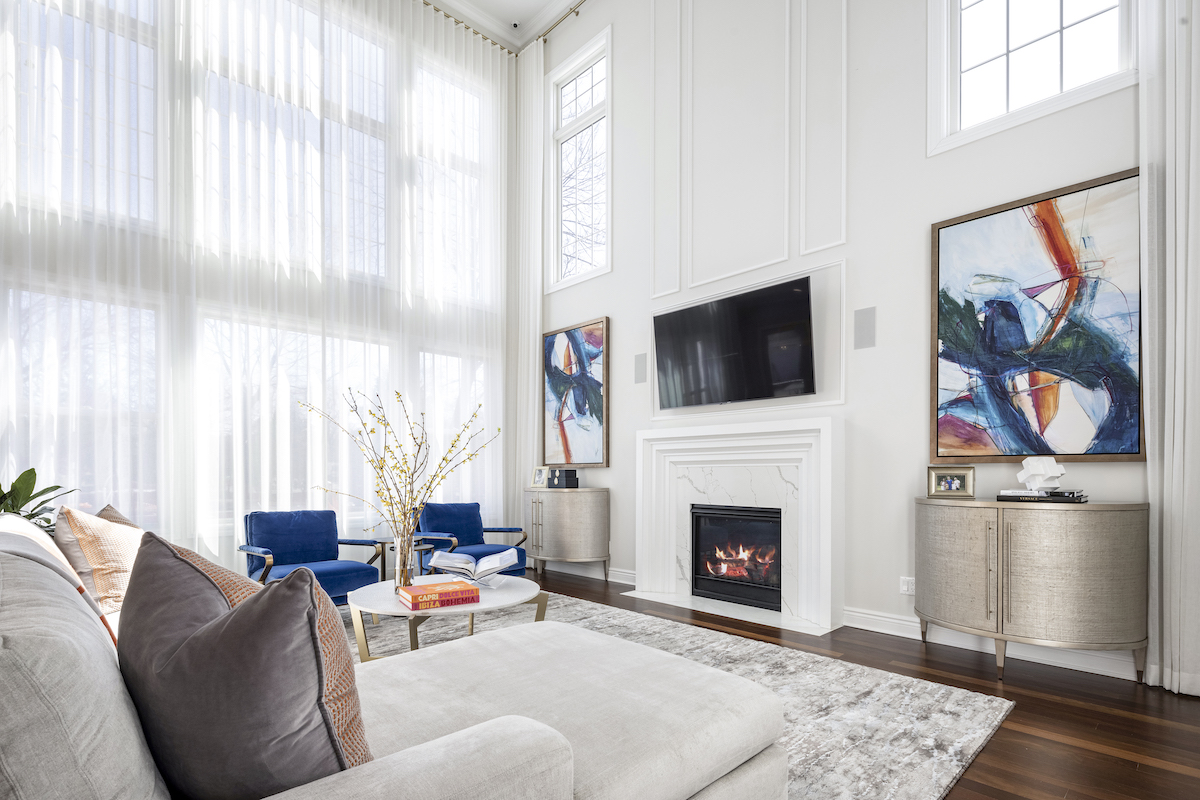 When Jose Jimenez and his wife, Noelia, first walked into the spec house in Glen Rock, they were wowed by the sense of space afforded by the two-story foyer and the view that stretched all the way through to the backyard. What didn’t wow them were the builder’s chosen finishes, which struck them as more ordinary than inspired. They bought the house anyway, and since it was only partially completed, they hired designer Elizabeth Akguc of Agape Design Group to bring their personal vision to fruition.

They didn’t want to start pulling up flooring and removing tile, so Akguc found herself challenged to work against elements that weren’t in keeping with the homeowners’ design aesthetic. “They wanted something a little more modern, a little more design-forward, with a more luxurious feel,” she says. But they also hoped the home would feel warm, inviting and fun. “We wanted our family to feel comfortable, but we also wanted the house to look well designed,” says Jose.

The owners weren’t wild about the dark wood floors, so Akguc worked on adding elements that would direct the eye upward. In the family room, she hung translucent white curtains that stretched from the double-height ceiling to the floor, which she covered (mostly) with a large area rug in soft shades of gray and white. Flanking the fireplace are two large, colorful pieces of abstract art that not only add color to the room but also take visual precedence over the flooring.

In the bathrooms, she took out the builder’s vanities—a job significantly easier than demolishing and replacing flooring and tile—and replaced them with something more in line with the owners’ vision. “The new vanities are more interesting and luxurious and draw the eye away from the tile,” she explains.

A love of color was part of the owners’ aesthetic. Akguc satisfied it with bright pops and sweeps of color against mostly neutral finishes and wall hues: In the living room, two sapphire velvet armchairs echo the predominant tones of the artwork, which the couple collects and which animate many rooms in the house. The calm neutrals of the dining room are offset by another large abstract piece and a pair of teal curtains.

Lighting was particularly important—a way of adding flat-out luxury, de-emphasizing the dark flooring and making the whole house feel cohesive. The oversized satellite fixture in the foyer, for instance, which the designer describes as “modern and fun,” sets the tone for the entire design. Its blackened brass elements are echoed elsewhere—in the brass legs of the entryway bench, for example, and the kitchen’s brass light fixtures, cabinet pulls and faucet. The rectilinear fixture over the dining table is also brass, and with its forest of shiny spindles tipped with round white lights, it communicates a mixture of luxury and fun that was important to the homeowners.

Given that the couple’s three children also live in this home, it needed to feel warm and comfortable, something that’s particularly evident in common areas such as the living room and the movie room in the basement. With its soaring ceilings, the living room could have registered as grand but cold, so Akguc worked to make it feel more inviting, incorporating soft furnishings such as the pair of relaxed velvet chairs, velvet pillows on a linen blend sofa and a thick, foot-pleasing area rug. The basement theater room, with its dark walls and ceiling and overstuffed furniture, feels cocoon-like—it’s easy to imagine sinking into those seats and not wanting to get up, even after the final credits have run.

The dining room too has a deliberate softness to it. The wood-topped table with its acrylic base is the only hard surface in the space; the soft area rug extends well beyond the comfortably upholstered dining chairs.

Like so many of the pieces in the house, Akguc chose the table, manufactured by Century, for its timeless design. “The clients splurged on a lot of pieces,” she says, “but I don’t ever want them to feel outdated.” Consider the pair of console tables in the living room: Their curving, half-moon silhouette seems at once both classic and contemporary—and their silver finish adds not just pop but a subtle wink of fun.

In fact, multigenerational fun is a theme that repeats itself in this house, from its imaginative lighting to its theater room and adjoining bar to the basement’s bright pop-art pieces. There’s no doubt that it’s overcome its original limitations to become a multilayered home that magically marries fun, warmth, luxury and timeless high-end design, thanks to the homeowners’ original vision for what a family house should be…and the designer who helped them achieve it. 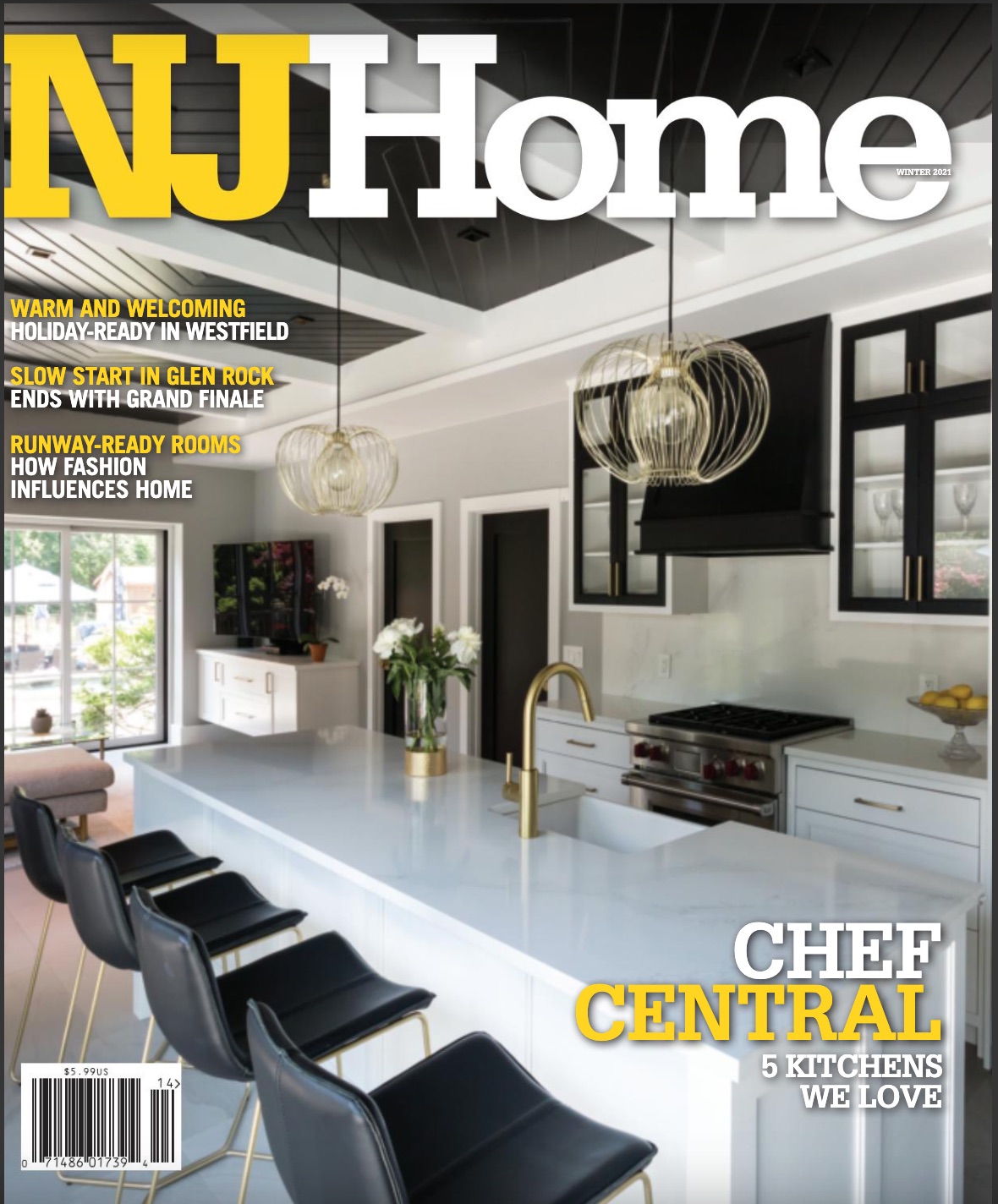