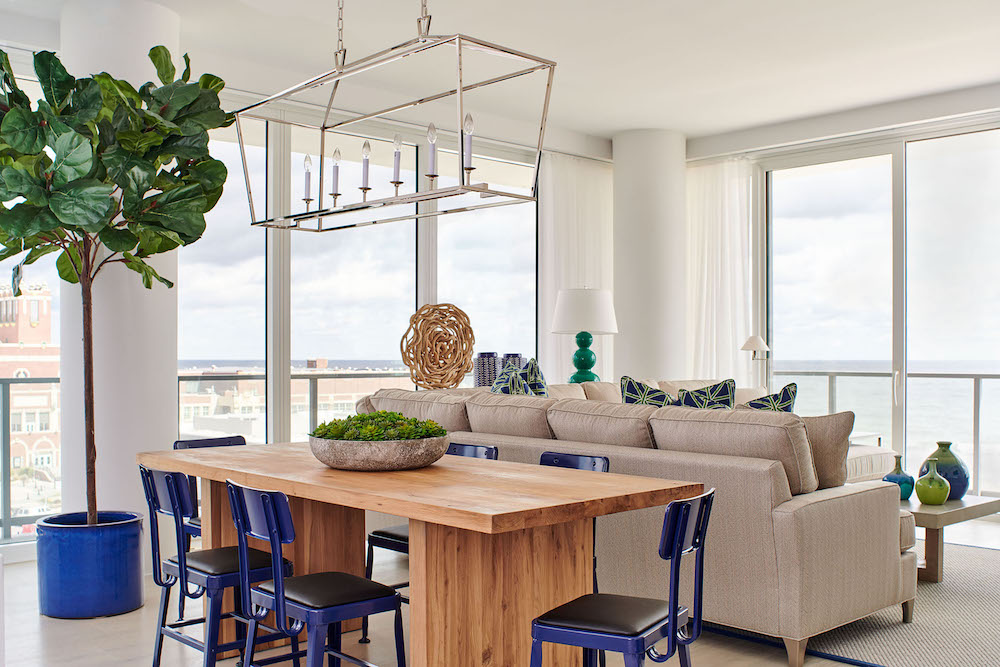 A family’s Asbury Park vacation condo is designed around its best feature: a breathtaking view of the Atlantic. 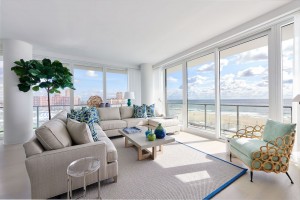 A Whitehouse couple didn’t have to travel far to find their ideal getaway: They discovered a perfect staycation spot in Asbury Park, a little more than an hour from their home. The husband and wife, in fact, were so dead-set on setting up in the Jersey Shore town that, earlier this year, they purchased a newly constructed, two-bedroom condo there sight unseen. What they knew about the place was little more than its size and location—along the beach on the sixth floor of the luxurious Asbury Ocean Club. 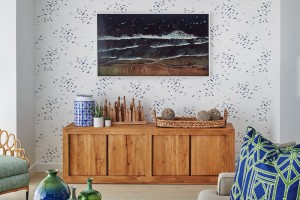 So who better to put in the decorator driver’s seat than Marc Gold-berg of Long Valley-based Interiors Matter? The homeowners, parents of three teenage boys, had years earlier entrusted several projects at their full-time Hunterdon County residence to the interior designer. Now considered a friend, Goldberg accompanied the family when they went to see the completed condo for the first time.

“Everything was brand new, pristine and white,” he recalls. “And we all were bowled over by the view. The first thing you notice is the ocean and that wonderful sound.” 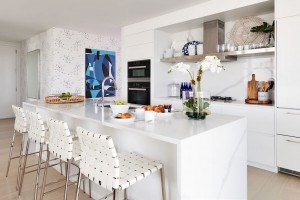 Maintaining sight of the Atlantic was the couple’s only directive, as the homeowners “let me do my thing,” Goldberg says. Given a blank canvas, the designer immediately had a vision to create a space unlike typical shore homes. Architects built the condo with a modern layout and look, which Goldberg wanted to preserve by keeping the rooms airy and bright instead of muddling with them by adding an abundance of nautical details and seashells. 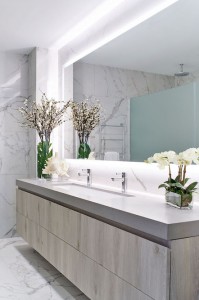 “I didn’t want it to scream ‘beach’—that’s neither my style nor theirs,” he says. “And there was no need to overdo the theme because you immediately see the beach and the people on it—there are windows everywhere.”

The couple purchased the condo primarily for quick getaways and entertaining, so Goldberg’s focus was on making an ideal great room. The main living area is closest to the terrace and will undoubtedly be one of the unit’s most-used spaces. With that in mind, the long end of an L-shaped, beige sectional sofa is positioned to face seaward; the shorter end gives guests direct sight of an adjacent wall where a big-screen TV is installed.

“People need a good view—of the beach and the TV—so that dictated where we put the couch,” Goldberg says. A rattan armchair by Palecek with seafoam green, performance fabric cushioning is placed opposite the couch with its back almost entirely to the terrace. The chair, along with throw pillows and a trio of ornamental vases on the beige coffee table, provides one of few pops of color in the room. 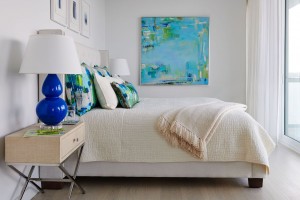 “For the most part, everything is neutral except for a few small accessories in blue and green,” says the designer. “Those pieces really brighten the room.”

Some of the bright hues carry into the dining area, where Goldberg surrounded RH’s reclaimed oak plank table with six indigo schoolhouse chairs. “The condo can fit 12 to 14 people comfortably,” he says, “so I knew we needed a big couch, a big table and plenty of places to sit. And people will be coming up from the pool or beach, so we selected furniture with indoor/outdoor fabric. There’s very little in the space that’s not durable.”

Four woven leather barstools sidle up to an expansive kitchen island, where conversation, food prep and meals all take place. The developer-designed space isn’t equipped with many upper cabinets and storage areas, but Goldberg found areas for personalization. A stainless-steel range hood, for example, is fixed with shelving to keep and display dinnerware. 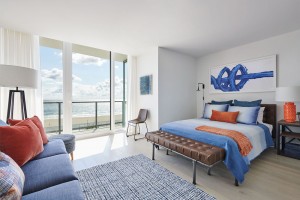 “We also left a mark on the walls,” he adds. “I wanted to have some art and color, so wherever I could hang art or wallpaper, I did. The idea of wallpaper can be scary, but the one we chose—Wallquest’s white with a scattering of navy birds—connects with the space.”

Goldberg took the same approach in both bedrooms. A colorful 54-inch-square painting is the focal point of the otherwise neutral-toned master bedroom. Robert Abbey lamps and custom accent pillows along the king-sized bed and upholstered headboard pick up hues from the specially made artwork. At night, motorized sheer curtains by Somfy—which are found throughout the condo—can be closed, giving the room a “Paris hotel vibe,” the designer says.

With a tufted brown leather bed, the second bedroom has a masculine feeling. “They wanted the room to be for the boys, so they let me give it a youthful look,” Goldberg says. Blue is the dominant color in the space—it’s reflected in the couch, rug, bedding and wall art. “And some orange on the couch and bedding adds a little surprise and a huge impact in the space,” he adds.

The entire design project came together in two to three months. As they did while the condo was under construction, the homeowners stayed away while Goldberg completed the decoration. “I’m a little bossy,” he jokes. “I didn’t want them to see it while it was coming together.”

Their impression when the work was done? “They were flabbergasted,” says Goldberg. “It was a great reveal.” 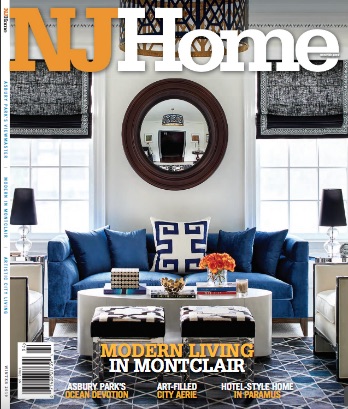