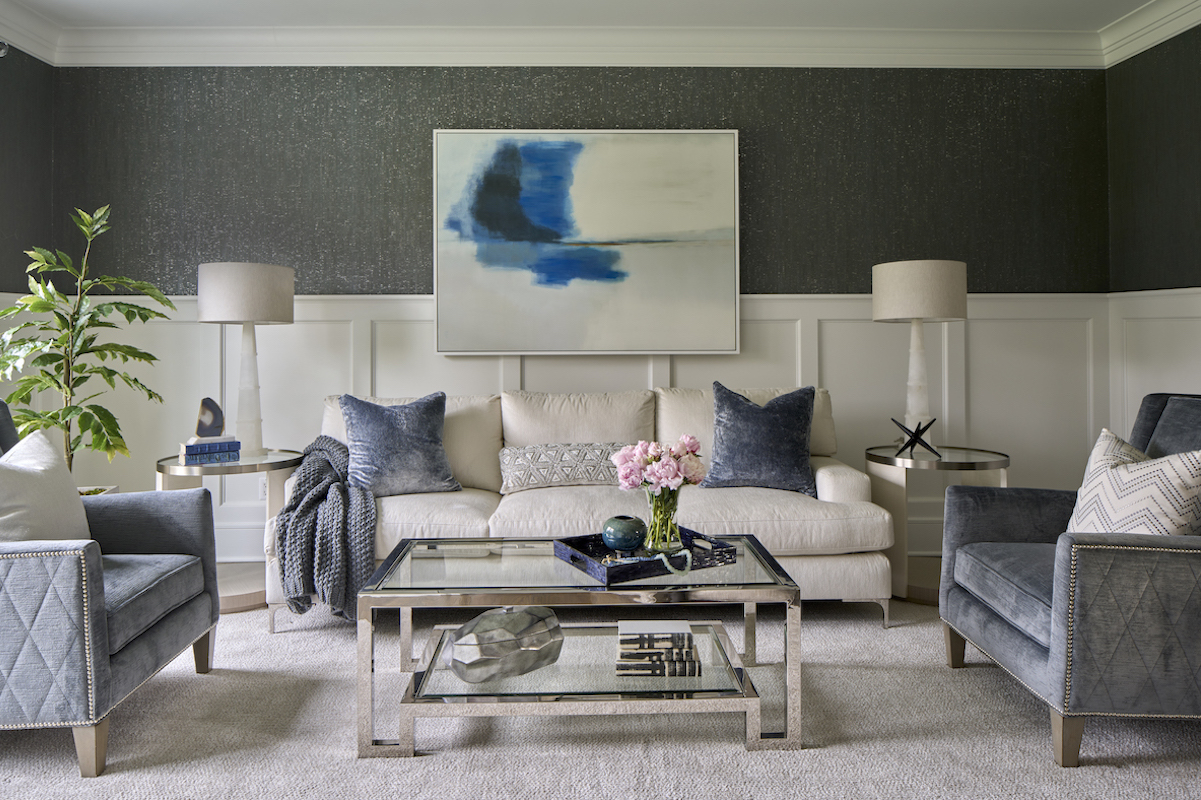 It was a blank slate—a designer’s dream, and the perfect new start for Sean and Jin Xu, their 15-year-old daughter and their 11-year-old son. The Xus bought the new build in Upper Saddle River in 2021 and enlisted Wyckoff-based designer Jennifer Pacca to make it the family home they’d long envisioned. “They wanted a contemporary home that was livable for a young family of four,” says Pacca. 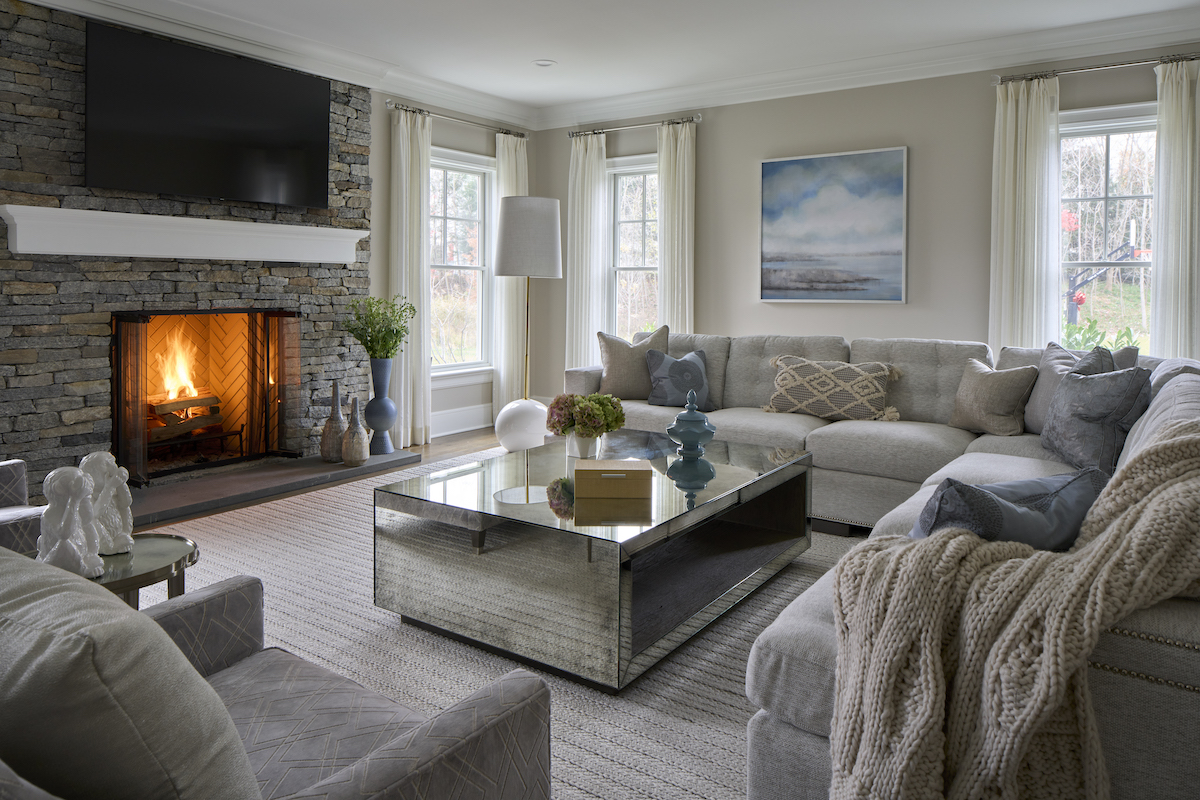 The house’s tabula rasa also lent itself to the “unified design” the Xus were looking for, which Pacca achieved largely through the use of color: a palette of neutrals—whites and soft grays—and blue, used largely as an accent. “We didn’t want it to be too noisy or bright,” says Sean. In the formal living room, for example, the wainscoting is white, but the metallic cork wallpaper above it is a subtle grayish blue. The sofa and rug are a pale cream, and a pair of comfortable armchairs are covered in pale blue chenille. The room might come across as muted, except for the pop of navy and royal blue in the abstract painting above the sofa.

In the family room, gray predominates, both in a large sectional sofa and in two armchairs upholstered in geometric-cut velvet. But even here blue makes an entrance, in the form of an arresting seascape between a pair of large mullioned windows. Soft blues grace the dining room, in the subtly patterned area rug and the upholstered dining chairs.

With a preteen, a teenager and a family dog, the family craved comfort too. The family room, for instance, features an expansive sectional sofa loaded with overstuffed throw pillows; the sofa faces the room’s large fieldstone fireplace, also gray, but enlivened by a clean-lined white mantel. For the Xus, what they call “visual comfort” was as important in the room as physical comfort. 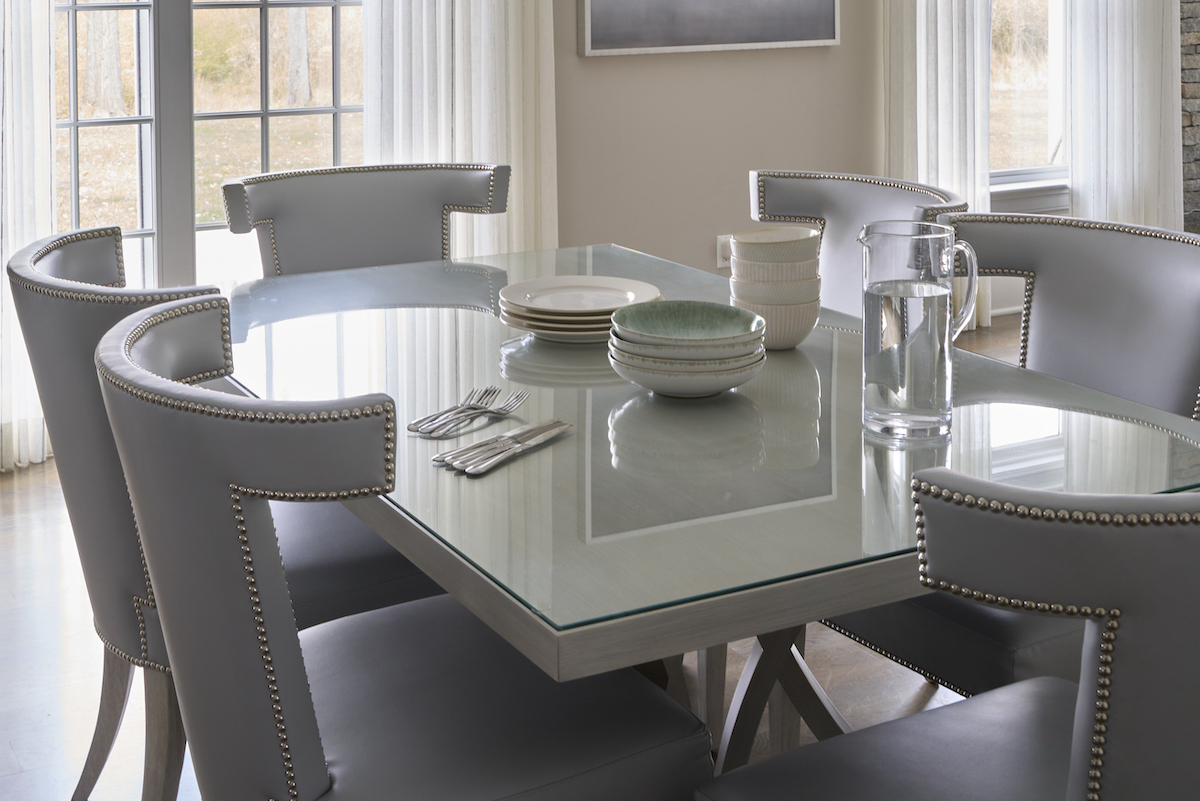 And while the home’s design radiates the calm and the muted elegance that were so important to the Xus, it’s anything but dull. “The clients definitely like a little bit of glam,” Pacca says. She delivered it in the form of sparkle in the wallpaper above the wainscoting in the living room—“it creates a nice dramatic feel,” the designer notes—as well as a similar glint on the dining chairs and a gilded finish on the large rectangular mirror behind the dining table, which, Pacca says, “dresses up the space.” The buffet, too, with its white, shimmer-painted finish, is a little bit trad and a little bit glammy. Even in the family room, glam plays a cameo role, in the mirrored coffee table—though it’s softened by the incorporation of wood, and the mirror itself is antique glass, with a more subtle reflectiveness.

The chandeliers above both the dining table and the breakfast table also add a dressier feel. They’re at once elegant and contemporary, the first deriving its sparkle from polished nickel and glass, the second from silver leaf and opaque white recycled glass. The breakfast table sits in the middle of a sweeping, open-concept space comprising the family room and the kitchen, and the chandelier, Pacca says, “grounds it,” affording it a sense of having its own boundaries even as it’s part of a greater whole. 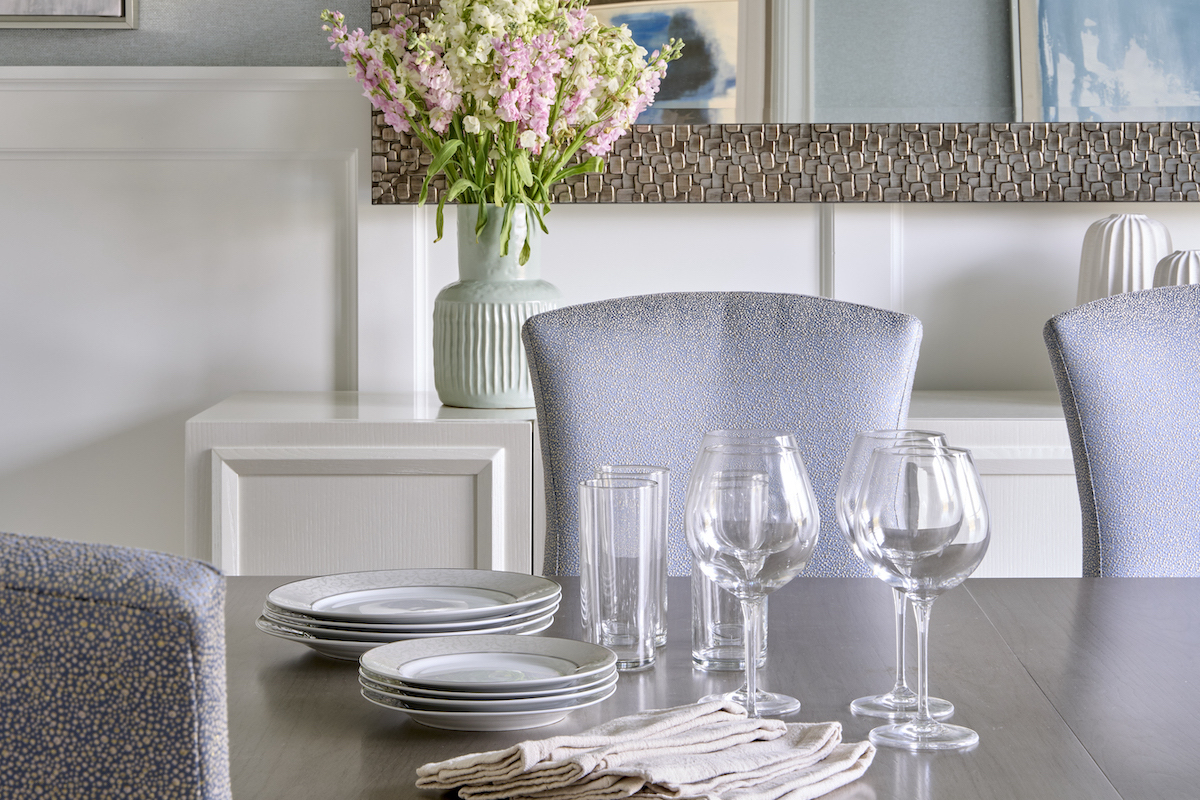 When asked, Sean Xu is hard pressed to name a favorite space. “There’s no one room,” he says. “It’s the overall environment, the atmosphere as you walk in.” In fact, the design is all about atmosphere: Entering the house, you can’t help but take in a deep, comforting breath and then—just as Pacca and the family envisioned—let it out and relax.