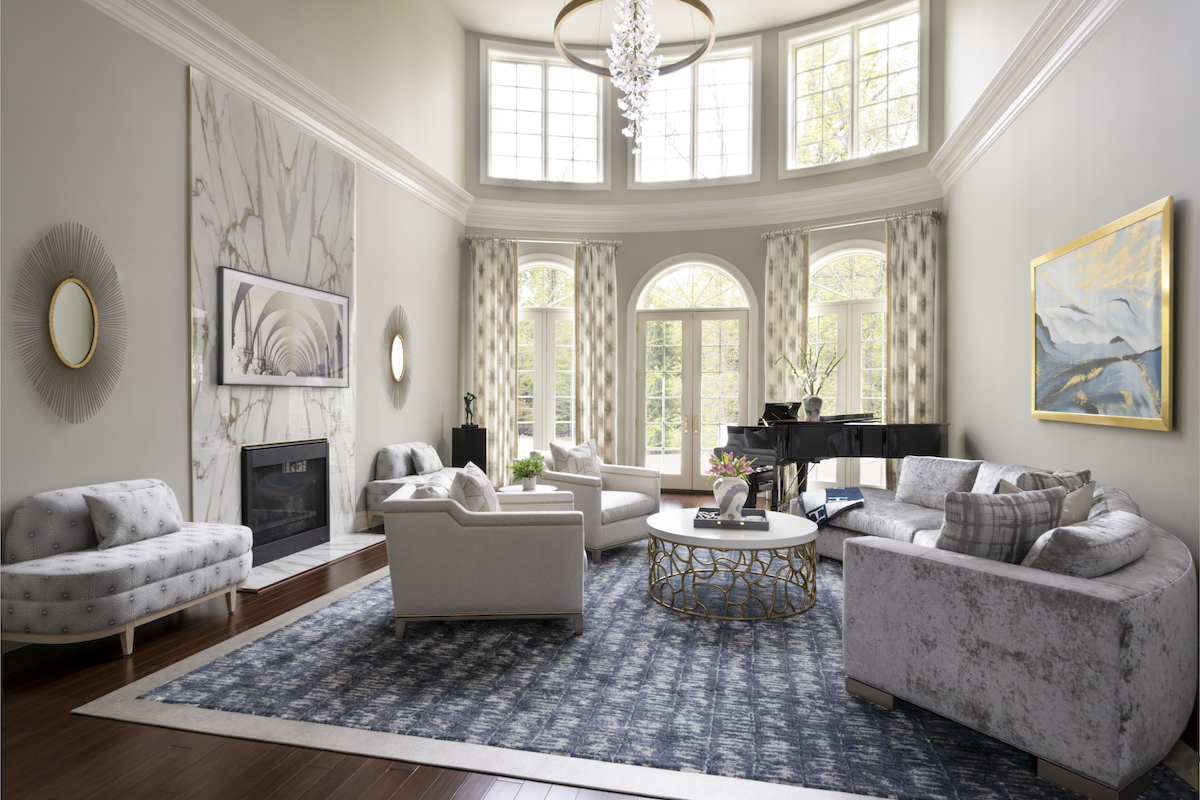 A fun-loving upper Saddle River Family with three school-age children wanted the best of both worlds: all the glam and sophistication of a great room, but none of the fuss that stifles a lively gathering. When Laurie DiGiacomo of the eponymous Ridgewood design firm arrived on the scene in 2020, the room was empty except for a Schimmel piano. But that piano was a hint that the room would someday rock.

The house was a five-bedroom, center-hall colonial built in 2017. Its owners were “two really busy professionals who just didn’t have time to really work on the home,” DiGiacomo explains. “They had worked with someone [a designer] before and didn’t feel like that person was getting what their needs and goals were.” Fortunately, the homeowner’s yoga instructor knew about design as well as fitness and recommended DiGiacomo. And the couple knew what they wanted: an entertainment mecca with class. (Also on the reno agenda: an empty living room that needed to become an office.)

“They had bought it [the colonial] from a builder, so the great room had very little detail,” DiGiacomo recalls. One thing the room did have was reddish-brown wood flooring, which, when combined with beige walls, clashed with the homeowners’ dream of “light and airy.” So, even before DiGiacomo’s arrival, the homeowners painted the room a pale gray.

For drama, the designer let the double-height windows set the stage for a focal point that catches the eye from the foyer as well as the second floor. The contemporary chandelier by Hudson Valley with brass ring and crystal flower vine is not only lighting, but a “work of art,” she says.

Reflective fabrics extend elegance to the anchor of the room: a Stanton rug in blue with a silver thread flowing through its pattern. “At night, when the chandelier is on the rug, it really shimmers,” says DiGiacomo.

This room can hold 15 people in lounge-like comfort, but who says practical can’t also wow? Each piece adds to the room’s glamour, from the platinum chenille of Vanguard’s sectional to the white linen chairs with brass nailheads and hair-on-hide pillows detailed in beads.

As hinted at by the mirrors flanking the Calacatta-like slab fireplace, DiGiacomo would also rely on starbursts for interest, which is reflected in the custom banquettes and the lined cotton-canvas draperies. Beaded gold trims the Fabricut panels, as the designer mixed gold and silver throughout the room. The Vanguard white-quartz cocktail table with a gold-painted base fits almost like a puzzle piece into the semi-circle sectional, above which an abstract delivers a pop of blue and brass.

“I love the coffee table,” says the homeowner. “It’s functional with the coasters but so refined and beautiful.”

DiGiacomo was ready, too, to honor the family’s desire for an office rather than the formal living room the builder had envisioned. Step one: Brighten it up by trading dark wood for Benjamin Moore’s Van Deusen Blue. Although at first hesitant, today the homeowner says, “The finished design alongside the light furniture creates a gorgeous effect.”

Treating the chandelier like “jewelry,” DiGiacomo featured a brass geometric piece by Hudson Valley. For harmony, she introduced a gray desk with geometric brushed-nickel legs atop a Jaipur rug with a complementary pattern. Topped with gold-trimmed lamps, the credenza stands out for its painted, raffia-treated fabric. Leaving no shape isolated, tufted swivel chairs by Bernhardt evoke the arch of the built-ins. Another highlight, as “beautiful from the outside as from the inside:” the Fabricut sheers with a horizontal band “like the squiggles of a heart monitor,” says DiGiacomo.

What difference did this reno make to the two spaces it tackled? “They were just plain rooms,” says the homeowner. “Now they’re showcase rooms.”
TEXT by DONNA ROLANDO
DESIGN by LAURIE DIGIACOMO INTERIORS
PHOTOGRAPHY by TORI SIKKEMA