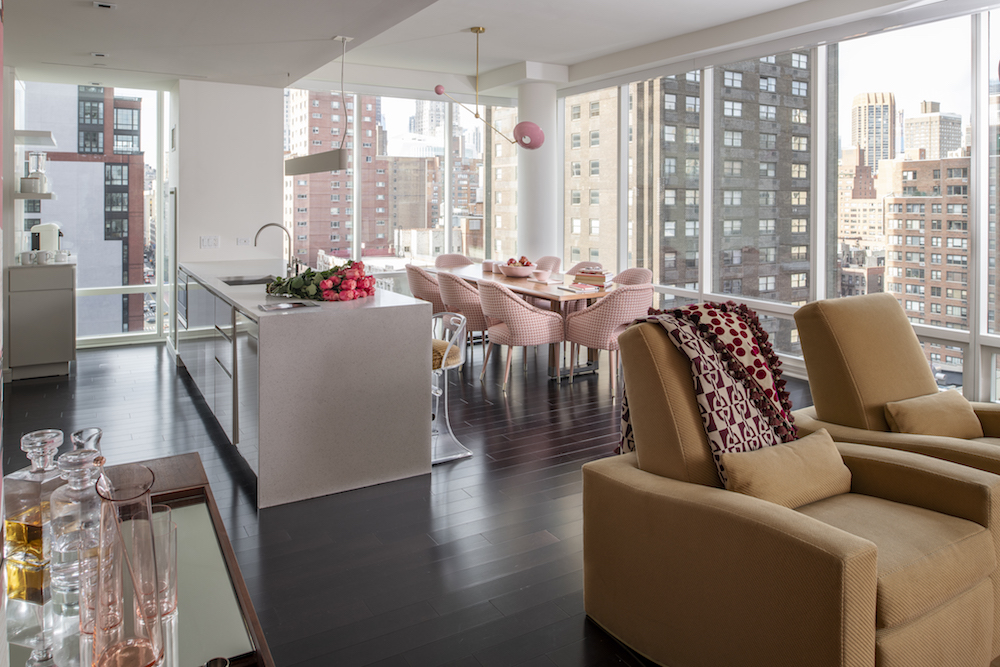 A Colts Neck couple’s second home in Manhattan echoes the aesthetics of its charming neighborhood. 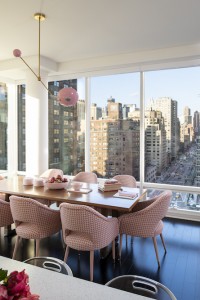 James Yarosh and these clients go way back. About 23 years ago, a Colts Neck art-collector couple stopped by Yarosh’s then-new fine art gallery in Holmdel. They eventually asked Yarosh to design their oldest daughter’s nursery, one of his first-ever interior design assignments, and, pleased with his work, kept in touch and hired him for more projects over the years. 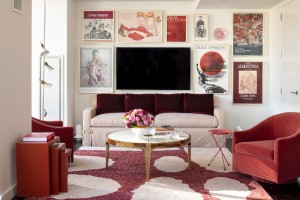 Recently, with their two daughters moved out and in college, the husband and wife called Yarosh again to help them find—and, of course, redesign—their dream apartment in New York City, which would serve as their family’s second home and long-weekend/holiday getaway. “Having worked with them in the past I knew what they expected and what their tastes were, so it was about seeing the space and seeing what we could do with it,” Yarosh says. “The apartment was a financial investment, but more than that—an investment in their future.”

The couple bought and eventually rented out a stunning 2,000-square-foot, three-bedroom, three-bathroom, updated corner apartment in Gramercy. About a year before their tenants’ lease was up and they planned to move in, the homeowners and Yarosh began shopping for furniture and décor, using the view from the living area’s floor-to-ceiling windows as design inspiration.

“My first impression of the home was the view,” Yarosh says. “First instincts are strong with me, because as an artist I trust my gut and try to make a dialogue with the architecture and the house.” So he introduced a gentle pink-and-yellow palette to mimic the red-brick buildings outside for a different twist on the tried-and-true concept of “bringing the outdoors in.”

Patterns and textures inside the home also mirror the East Side scenery. For example, “that tone-on-tone color on the dining room chairs mimics the buildings outside,” says the designer. “The Hermès geometry wallpaper in the living area is a little grid of colors that looks like the grid of windows in the buildings.” The idea, Yarosh says, was to make it seem like the homeowners were living within this landscape. “Even the carpet is a big pink cloud!” he says. “You have a New York City apartment, you’re experiencing life, so on all levels it was trying to make that feel like a reality. The design was meant to be fun.” 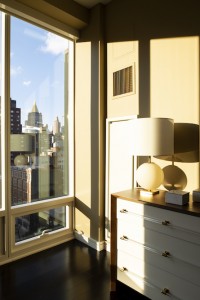 Bold pink Gucci wallpaper covered in white cranes, a backdrop to a vintage gold bar cart, adds whimsy to the space—“that large-scale pattern was bold enough to take on the Manhattan view,” says the designer—and is adjacent to a gallery wall centered on the TV that comprises museum posters acquired on Yarosh’s international travels. 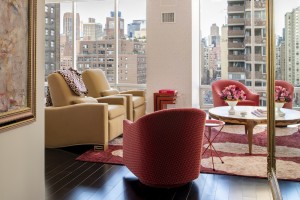 Another apparent theme throughout the home is fashion and its intersection with art. “The sofa is a blush pink with a gold pin-dot fabric and little gold buttons down the side—it’s really lush, almost like red nail polish,” Yarosh says with delight. “It’s sort of like an evening dress—you know what I mean? Or a crushed red velvet tube top. It was fashion-forward in my mind.” Artistic Frame dining chairs, with Dedar fabric resembling a Chanel jacket, have pink painted legs with gold caps like nude shoes. Hermès mohair swivel chairs, a custom-raised velvet polka-dot throw by Kazumi Yoshida for Clarence House and a snack table and martini set by Gucci amplify the home’s luxe, couture feel. 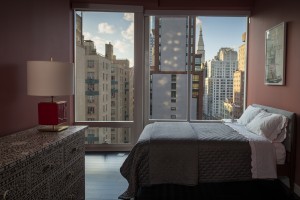 Yarosh and his team went starker for the apartment’s three bedrooms and three bathrooms, giving the master bath a minor facelift with updated cabinetry. “The focus was on the main living spaces, so we bought beds, dressers, night tables and lamps (all by Kate Spade for Foundry Lighting) for the bedrooms and continued the color palette from the main room,” he says. “The bedrooms are simpler because we thought things could unfold depending on what the family’s needs were.”

In fact, the design team considered the clients’ evolving requirements in many aspects of the project. They created a long custom dining table with multiple leaves for holiday dining, made certain that the sofa was a pull-out sleeper for when unexpected guests came to town and chose multi-functional incliners and swivel chairs in the seating area to ensure that the couple’s adult kids (and their pals) would be comfortable.

In every aspect of this “classic contemporary” design, though, artistic beauty is paramount. “Once you start living with art, you see what the benefits are and it’s like you can’t go back,” Yarosh says, explaining why he has so many repeat clients. “You feel like you’re part of it. There’s something to living with beautiful things.”

Asked if he has any other projects planned with these longtime devoted clients, Yarosh demurs with a laugh: “Not right now but who knows? Maybe the daughters will get married!”