When the building on East Park Street was new, Newark was a city of immigrants and industry, businessmen and bootleggers, nightlife and live theater—a place as historic as nearby Military Park, just celebrating its 250th anniversary, and as modern as the Art Deco architecture rising in the vibrant downtown. Over the next hundred years, the building and the city would lose much of their Roaring Twenties luster. But today, downtown Newark is in the midst of a bustling revival, and the six-story building has been reborn as the TRYP by Wyndham Newark Downtown Hotel, a gem of a boutique hostelry polished to perfection by Montclair-based designer Blanche Garcia.

Garcia set out to revitalize the building and usher it stylistically into the 21st century without ignoring its Art Deco roots. The result is an interior that’s elegant yet playful, contemporary but cognizant of the past, in a style Garcia characterizes as “modern deco.” “You want a nod to the past,” she says, “but you don’t want to live in the past.” 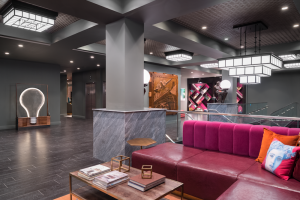 Those modern deco elements include the bar’s half-round banquettes with backs of channeled mohair (a motif repeated throughout the hotel’s public spaces), upholstery in glowing jewel tones, stacked geometric pendant lights in the lobby, massive columns sheathed in chamfered, gold-toned metal, and two stunning torchieres comprising nearly life-sized seated nudes holding glowing glass orbs. The torchieres began life as fountains, purchased in Thailand, sent to California to be painted, and finally fitted with the glass globes and wired for electricity. 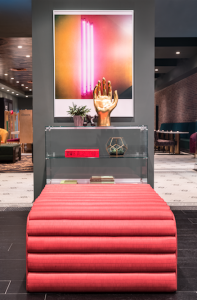 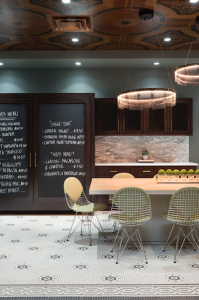 Garcia’s challenge was to roll all of these elements into an interior that hewed to the TRYP brand, which is characterized by a sense of place, a celebration of travel, open spaces that invite lingering and playful spots throughout that promise bound-for-Instagram photos. Reminders of Newark’s past and present are everywhere, from a colorchanging oversized lightbulb (Thomas Edison debuted his first electric light at an exposition in Military Park) to the murals that greet guests on every landing, depicting Newark natives—Queen Latifah and Shaquille O’Neal, for instance. Another nod to Newark’s history is the name of the bar/restaurant in the lobby, Dutch’s, named for mobster Dutch Schultz, who famously hung out at a little boîte around the corner (since demolished). Though the building was virtually gutted before the renovation, Garcia kept two elements from its past, per the requirements of the city’s Landmarks & Historic Preservation Commission: the “Chiclet” tile floor in the bar and restaurant and the outlines of the original windows on the brick-and-sandstone exterior. 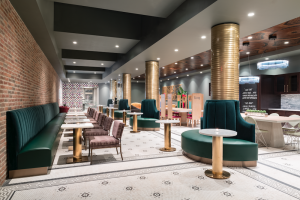 The travel theme is evident throughout the public spaces: Garcia staged a cozy corner in the lobby with a whimsical mile marker (“São Paulo, Brazil, 4778 miles; Ferry Street, 2 miles”) and “shelves” that are actually sliced-down vintage suitcases. And she melded travel and Art Deco nostalgia in a custom wooden frieze depicting an early 20th-century plane, train and car. Garcia made sure those public spaces were open and inviting: “The lobby is truly open-concept,” she notes. “The front desk wraps around to the lobby, which flows into the lounge.” The restaurant is used in the morning as a breakfast bar until it opens for business at lunch. “You don’t want to feel there’s a void at any time,” the architect explains. 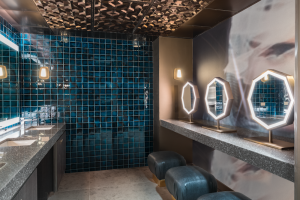 With its vivid colors and eye-catching design accents, the lobby is an Instagrammer’s dream. On two splashy pendant chandeliers, the individual lights are shaded by postcards that Garcia transformed into holograms; each card depicts a locale that’s home to a TRYP hotel. But nothing says “selfie” like the tall chairs that surround a long table in the restaurant. Emblazoned on the back of each chair is the name of a royal personage (“King,” “Countess,” “Joker” and so on); on the front are portraits depicting each of the royals (and the two jokers) and playful three-dimensional crowns, designed to sit above each diner’s head. One of the hotel’s owners, Brendan Berger, says that “guests like the fun, lively feel of the restaurant and the lobby in general.”

In the guestrooms, the TRYP brand—emphasizing pared-down furnishings, comfort (in the form of upholstered headboards and area rugs under the beds for a soft footfall), and airiness—is particularly apparent.

To all of that, Garcia added striking Art Deco elements such as channeling on the headboards and fuchsia houndstooth-patterned carpets. And if guests are looking for an in-room photo op, they’ll find one against a small wall marked with measurements of the heights of various Newark luminaries, the tallest of which, at seven-foot-one, is Shaquille O’Neal’s. It’s a small touch, but emblematic of a design that derives its charm from a panoply of small but perfectly wrought touches. 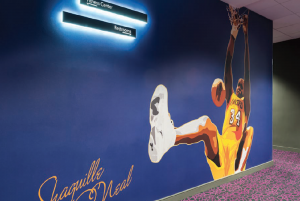 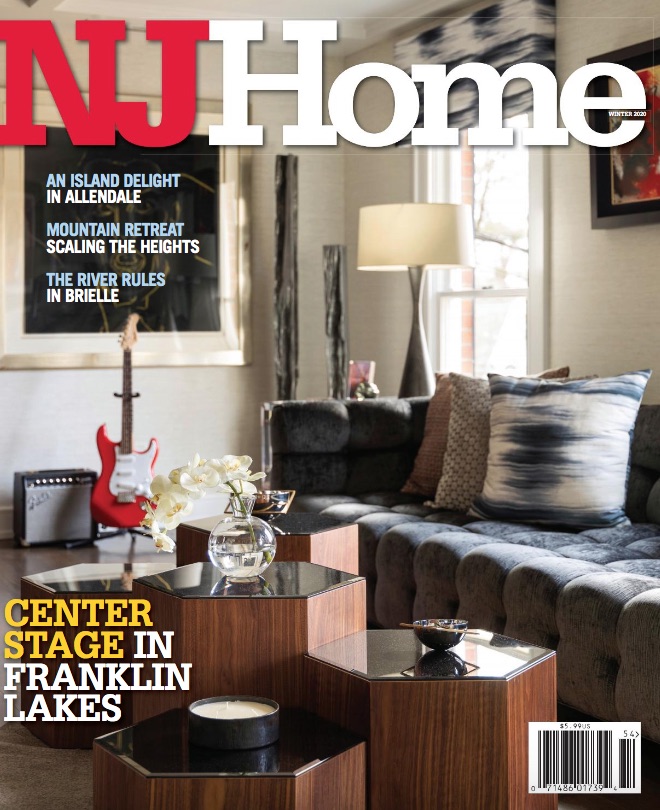