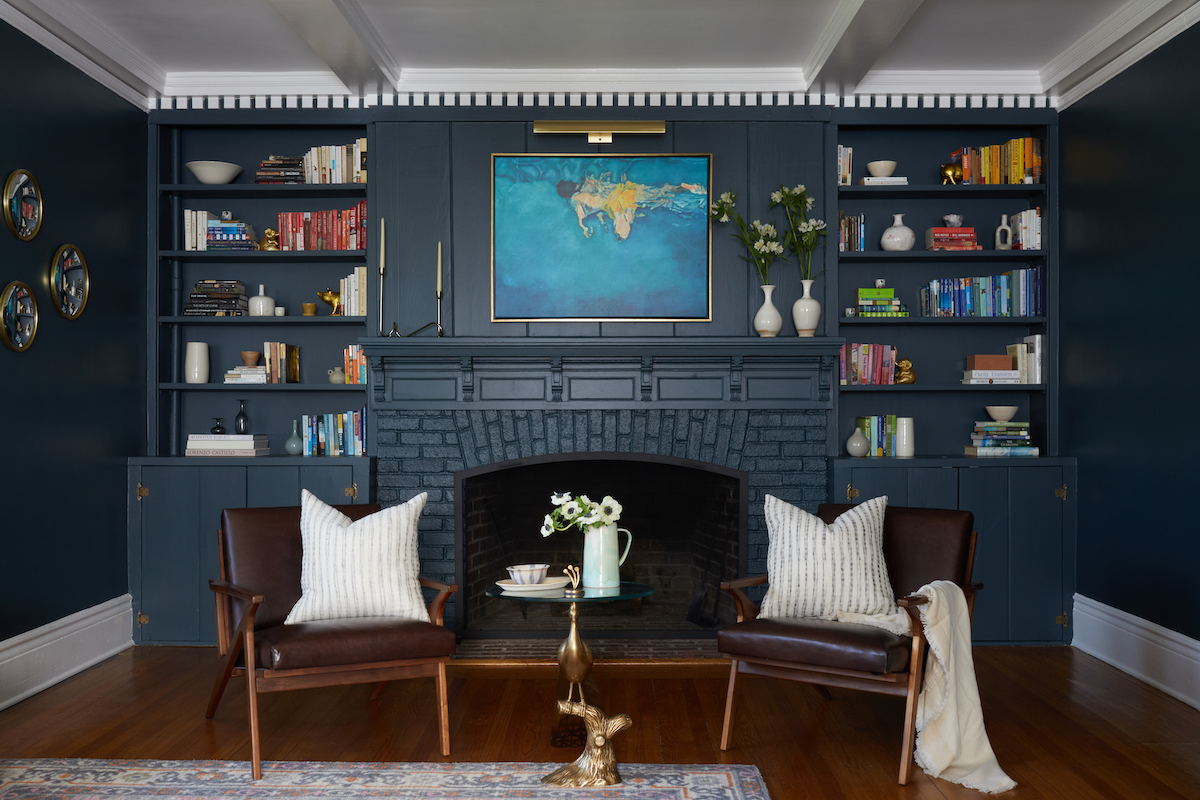 The house in the South Orange, nearly 100 years old, was replete with original architectural details and boasted beautiful hardwood flooring, also original and in surprisingly good condition. But the interior paint color used throughout the house wasn’t exactly resonating with its new owners. “Everything was beige,” says one of the homeowners, a lawyer and ceramicist who puts a premium on color. “The walls were beige; the trim was marshmallow.” Given that the couple would be spending a fair amount of time at home—they’d moved during the pandemic from Manhattan’s Upper West Side with their then 6-month-old daughter—they were particularly eager to banish the beige from the living room. So they brought in designer Sarah Storms to transform the room into what the homeowner describes as “something that felt bright and colorful and cozy, that worked well furniture-wise, color-wise, wallpaper-wise, and that was considerably more interesting than”—she searches for the right word—“beige.”

When Storms saw the house, she realized the dining room needed a makeover as well. “It was very much in the former owners’ style,” she says—beige and bland. The design she and the homeowners devised for both rooms, on the other hand, would reflect what Storms calls “a grand bohemian concept that’s comfortable and refined but also artistic—something moody, yet bright.”

The living room presented another problem, in the form of a baby grand piano the homeowner had inherited from her grandmother. She and her husband had never liked the piano’s red finish, which looked particularly out of place against the existing beige walls. So for the living room, Storms chose a dark teal paint, which not only complemented the piano but also ticked off “moody” on her to-do list. She accomplished “bright” by painting the trim, coffered ceiling and window shutters white, choosing a white sofa and a modern lighting fixture with large white globes. She also added pops of white in the form of throw pillows and a series of bright white vases on the built-in bookcases and on top of a whimsical metallic peacock cocktail table.

For the dining room walls, Storms chose Benjamin Moore’s Boothbay Gray, a medium gray with strong blue undertones that played well with the living room’s dark teal. Her inspiration for the color was another vintage piece, a dining set also inherited from the homeowner’s grandmother—or more accurately, the modern blue patterned fabric on the recently upholstered dining chairs. That upholstery also inspired the room’s blue-and-white wallpaper and its eye-catching ikat-patterned rug. Darker notes were provided by the unique oxidized copper sideboard and the dark wood of the dining set.

But the genius of Storms’ color choices lies not so much in the colors themselves but in the way she used them. In the living room, for example, she opted to use the teal paint not just on the walls but also on a pair of built–in bookshelves, the cabinets below them, the brick fireplace surround and the wood mantel. That monochrome treatment helped emphasize the architectural details on the mantel while downplaying the paneling on the cabinets and the wall above the mantel. “The farmhouse style of the paneling and the more formal style of the coffered ceiling didn’t really go together,” Storms explains. “Painting everything in a single color made it feel more cohesive.”

In the dining room, she installed a patterned wallpaper from the chair rail to the ceiling and painted the rest of the wall, including the chair rail itself, the same bluish gray. “Most people paint the trim, baseboards and crown molding white and treat what’s in between as separate,” she says. “But that can end up looking very stripey and unbalanced. When you paint from the chair rail to the baseboards and you treat that space in between as trim, it really takes on a stately, finished look.” But while it may be stately, it’s anything but traditional. And like the rest of the redesign, it’s a million miles from beige.