The interior designer who was hired to revamp almost every room in a new-construction home in Bergen County had a big job ahead of her. Not only were she and her husband longtime friends of these homeowners, but the man of this house was Josh Capon, a celebrity chef. He and his wife Lori wanted their family’s forever home to be modern yet warm, inviting and, as with his several restaurants, conducive to hosting (and feeding) large groups of family and friends.

“When it’s your friend and you know you’ll be spending time in that house, sitting on that couch one day, there’s another element of pressure to make sure it goes well,” says the project’s lead designer, Jill Raskin, co-founder of the New York City-based firm Flatiron27.

For almost a year leading up to the move-in date for Josh and Lori and their tween-aged son and daughter, the couple worked with their friend to give life and personality to the stunning five-bedroom, 5.5-bathroom residence—what Raskin called a “blank slate of new construction.”

The couple wanted space for entertaining, but also a thoroughly comfortable home for their four-member family. Says Raskin: “It needed to be cozy and warm yet still maintain a modern aesthetic.”

No problemo. The Capons were most comfortable with an overall neutral color palette of black, white and beige. However, they had acquired a lot of art while living in Manhattan and wanted to incorporate it in their new home for that “pop” of color. There was room for other strong hues too—the first of which came via the slate blue dining room chairs by Century Furniture. “That color is an important feature on the first floor, and we kept it going in the great room and through the house,” says Raskin, who worked on this project with her firm’s co-founders, Alexis Litman and Elizabeth McNellis. And the chairs needed to be highly functional as well as striking—for understandable reasons. “Josh was more involved in the chairs than some clients are,” Raskin says of the professional cook. “Having dining chairs that you want to sit on comfortably for hours was important to him.”

The same could be said for the charcoal gray Kravet couch in the great room, where the Capon crew spends most of their time. “He wanted a sectional that could fit as many people as possible,” says the designer. “Not everyone cares about that!”

But, like her clients, Raskin put thought into every detail. “The living room is right off the kitchen, so it’s a place where cocktails and hors d’oeuvres are served,” she says. “We chose a beautiful, partially upholstered Bespoke by Luigi Gentile ottoman that has a removable tray [for serving].” Two off-white chairs by Mitchell Gold+Bob Williams and a pair of black wooden stools by Worlds Away comfortably seat another four guests. The designer conceptualized and Adrian Meerman Design installed the floating-like geometric shelving on either side of the doorway to both open up the room and display a selection of the family’s personal items.

In the next room over, the oval marble kitchen table by Sit Down New York is perfectly sized for the immediate family of mom, dad and two kids, yet can easily accommodate more diners. The pink rug by J&S Designer Flooring was Raskin “trying to take a more fun direction,” she says, as was the fluorescent yellow one from the same brand in the main foyer, her favorite part of the project overall. “The foyer sets the tone for the home with dramatic lighting and flooring,” she explains. “The details on the stairs add a modern architectural element consistent throughout the space.”

Four black leather counter stools by Gus Modern at the large working island were the chef ’s pick and, like the rest of the home’s seating options, the chosen ones needed to have that combination of looking beautiful and being “comfortable to sit, stay, eat, drink, be happy,” Raskin says. “That’s first and foremost in Josh’s restaurants and in his kitchen.” An oversized window above the sink allows for both natural light and views of the outdoors, and a Roman shade complements it by offering texture and a bit of privacy. And every chef ’s house needs a chef ’s kitchen, right? This property has two; the second is located outside on the patio overlooking the pool and backyard.

The duo of light fixtures above the island were the only two that the builder, Remus Alexe of Grand Cupola Builders, installed and that the designers left untouched—or unmoved. Despite numerous large windows that let natural light seep in, illuminating accessories were imperative for the design of the main floor, so Raskin made sure to choose just the right pieces: Apparatus Studio for the foyer and Kelly Wearstler for the dining room.

Finally, upstairs the master bedroom features accents of purple, a color both the Mr. and the Mrs. adore. The womb chair beside the bed belonged to Lori’s grandmother and was one of the few sentimental pieces of furniture the Capons wanted to bring with them. The elongated shape and large square-footage of the bedroom allowed for even more alternate seating areas, Raskin says, so she put in both a sofa and a bench to give the couple options. Undoubtedly, though, the master suite’s standout is the feature wall behind the velvet Century Furniture bed, which gets its distinctiveness not from wallpaper but from wood.

“That is a wood-planked wall that we had redone into this dark grayish brown,” Raskin says. “It was a modern take on a rustic wood feature wall that makes that part of the room feel grand and spectacular.” The accompanying bathroom was a rectangle of beautiful white marble that needed just a little something, so Raskin brought in a lavender area rug to “incorporate texture and color and pull it into the rest of the house.”

The home turned out to be a triumph, and the designer’s friendship with the Capons came through with flying colors. “To date they are definitely my favorite clients, and they probably always will be,” Raskin says with a laugh. “They’re phenomenal people, and you can tell by how beautiful the results were. They were both open to my design as well as interested in making it their own.” 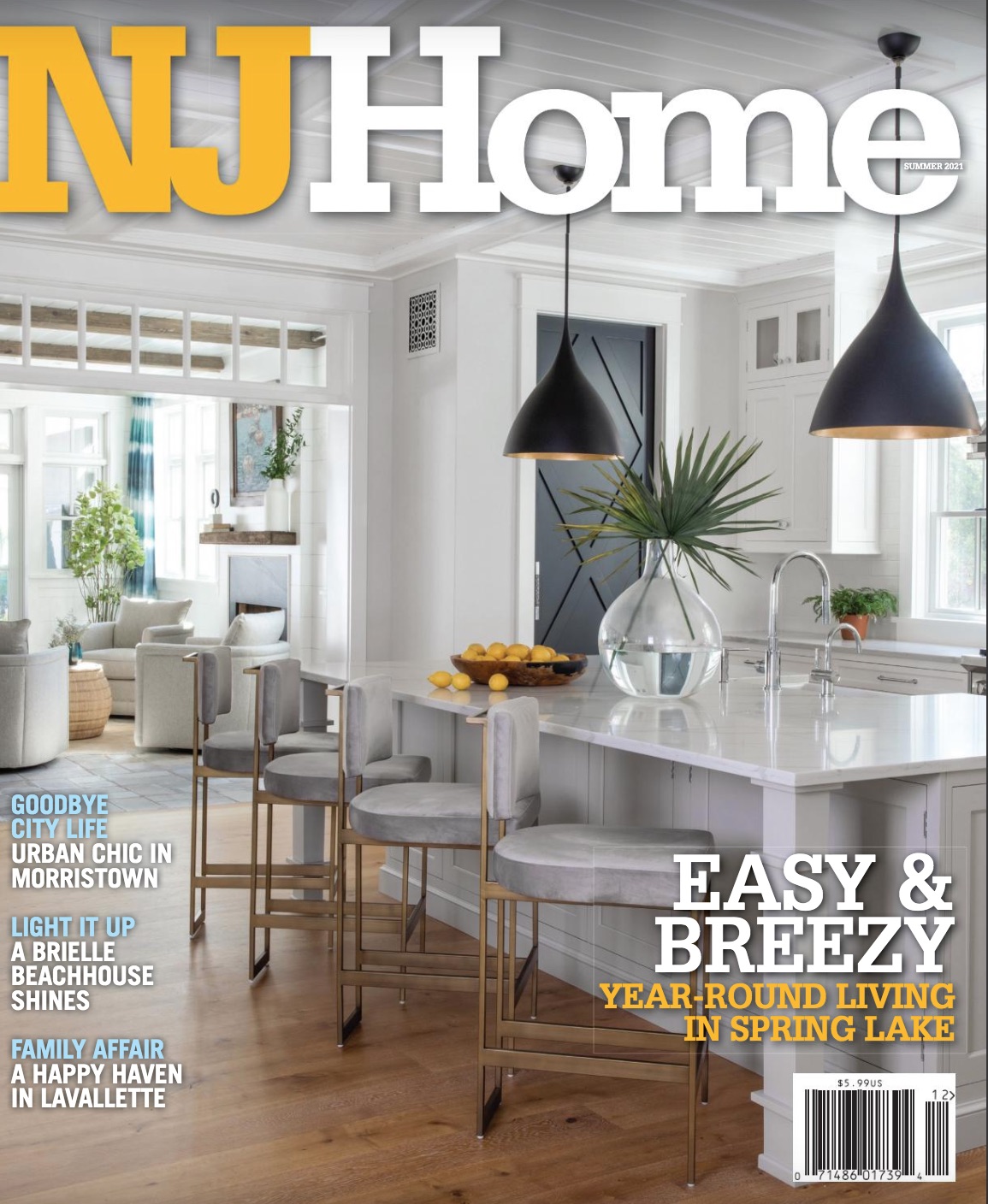