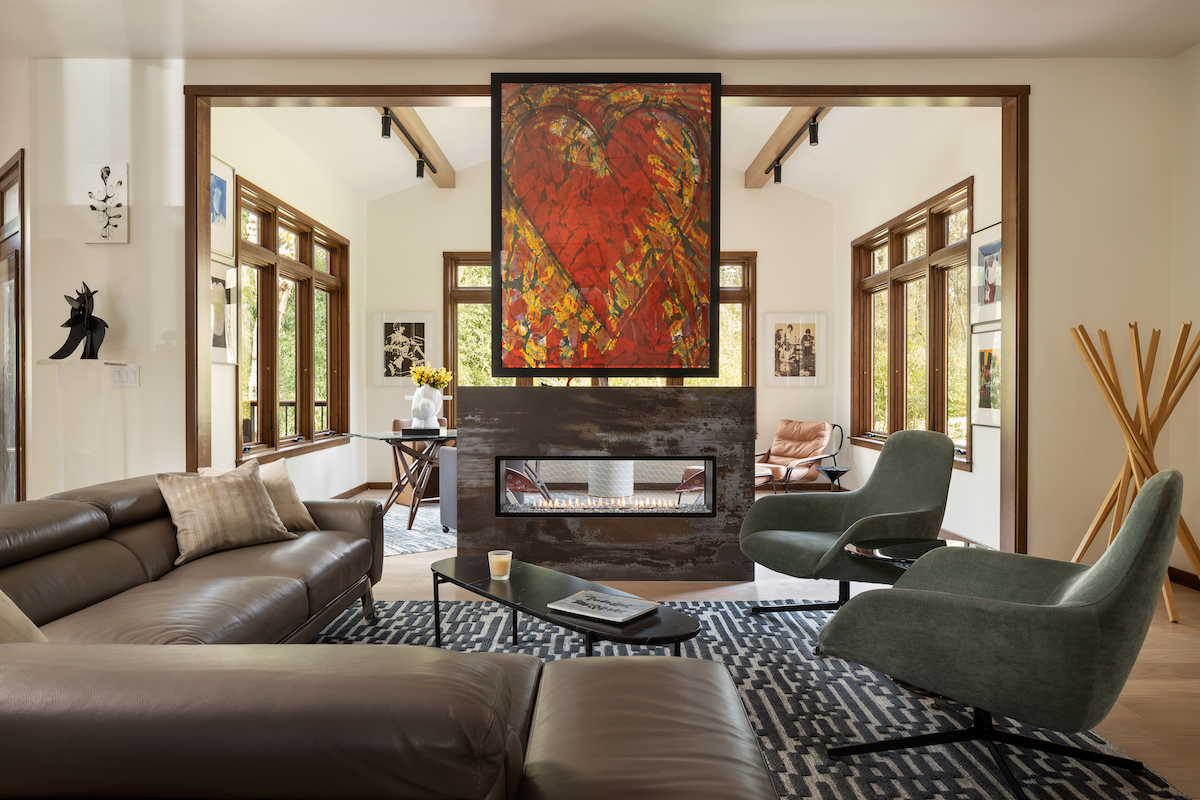 The purpose of art, artist Pablo Picasso once said, “Is washing the dust of daily life off our souls.” And his words still ring true—though he never foresaw the dark days of the recent pandemic and just how dusty we’d all get.

So it was that designer Anna Maria Mannarino of Mannarino Designs Inc. in Holmdel, given a great room and office area to design for the 2020 Princeton Designer Show House, decided to embrace art and music in her work. The homeowners she envisioned would be artists and musicians who opened their world to everything from metal sculptures to marker drawings, not to mention the likes of Andy Warhol, Jeff Koons, David Hayes and Bob Stanley.

In this sea of creativity, her showstopper was a shoutout to love: a 64-inch-tall heart above the Dekton Titanium floating fireplace. From artist Jim Dine, “the king of hearts”— he’s created enough of them—came this limited-edition woodcut etching and drawing that Mannarino says visitors wanted to reach out and touch.

“It was like a big hug,” she says. “I just felt that was what we needed during COVID.”

The fireplace had wow power of its own thanks to the Dekton Titanium finish she chose for its earthy, edgy vibe. “I love that it has that distressed vintage metal look,” adds Mannarino.

Not every feature outlasts a show house, but the remote gas fireplace “was always part of the original plans,” she says. Her recommended tweak was eliminating the wall above for a floating effect— a change the real homeowners welcomed, as they also approved her choice of stain for the standout beams.

Mannarino worked in the SoHo art world for years before embracing interior design; thus she was able to procure expertly an eclectic mix with Chelsea Art Group to complement this modern home. Diversity, yes; clashing, no. All-white walls did the trick.

One of the great room’s famous pieces, Andy Warhol’s “Sunday B. Morning” print, is an anytime-of-of-day wakeup above the driftwood-toned Interlude console, where “Torzione” in plexiglass by Francisco Sobrino joins the tribute to color. Most of the art immortalizes vocalists—for example, Nina Simone in the adjacent ink-on-paper work by Milton Glaser.

For the homeowners she conjured up for the show house, the great room’s oversized leather sectional, moss-green Italian suede swivel chairs and marble cocktail table just might set the scene for a guitar jam session.

Like the art, the beauty of the yard would have free rein as the designer avoided window treatments. Also basking in the glow of the fireplace, the office area is “light and airy” with furniture that says “sit and relax”—for instance, a vintage leather lounge chair and ottoman with a rare pop of color from red metal stools.

Multiple sculptures give the space the effect of a gallery, but a far from stuffy one. David Hayes’ painted welded steel is perched atop the glass desk with free-formed, carved base. Sharing the space is Jesús Bautista Moroles’ “Vanishing Edge Round” with a unique feature. Mannarino explains that the granite is carved so as to make music when rubbed with the back of a finger. Bob Stanley’s marker drawings of the Beatles and the Rolling Stones are another shoutout to the theme.

The design won an award in June from the American Society of Interior Designers, New Jersey, for a residential show-house space, and Mannarino likes to think the theme spoke to the heart as much as the eye.

“Personally, I find music to be a great healer,” says Mannarino, a musician herself. “As Beethoven once said, ‘Music can change the world,’ and studies have shown that [by] sharing elements of harmony, balance and rhythm, music and art unlock emotions that can be a great source of comfort and inspiration.”

She hopes her design did its part to provide “a little of that love, comfort and inspiration that we all yearned for at that time.”